Types of thatch and the method involved with each material

Water reed (Norfolk Reed)
Reed grows in reed beds alongside rivers and the broads. Reed grows annually from the rhizomes in the reed bed and is harvested during the winter once the frosts have removed the leaf. Cutting continues till the new shoots (cults) appear in the spring.

Water reed should always be fixed directly onto the rafters, this involves removing all of the old reed and replacing any broken timbers. Thatching with reed starts with bundles being fixed at the eaves. Successive courses are then fixed to cover the fixings of the course beneath. The reed courses are continued up the roof until there is no rafter to fix to, at this point, there is a length of reed and its fixing to protect, this is the main function of the ridge, which wraps over the top. As reed would break, the ridge is constructed from long straw or sedge.

Combed wheat reed
Combed wheat reed it a type of straw thatch where the straw has been cut then fed through a reed comber, this removes the grain and most of the flag to leave behind an unbroken neat bundle of straw with the ears at one end and the butt at the other end.
The method of using this material is very much similar to water reed apart from this material can be pegged (sparred) onto an existing coat of thatch, both materials are laid using a legget. This tool pats the straw /reed into place.

Long straw
Long straw is the most common thatching material in Essex. The traditional way to produce this crop is once the straw has been cut and stooked to dry out, it's then put through a threshing drum to remove the wheat from the ear, this may crush, bruise or even break the stem. As a result long straw needs a lot of preparation to clean all of the rubbish out, this process is called yealming. There is however another way to produce long straw and it is much less labour intensive for the farmer, meaning that a small farmer can produce much greater quantities. The process of harvesting this straw involves running a stripper header over the standing straw to remove the wheat, then a swather (straw cutter) cuts the straw and leaves it in neat rows which is then baled and netted ready for the thatcher to use on site. This type of straw still needs the 'yealming' preparation. Long straw thatch has a totally different appearance to the other 2 materials and it is more of a shaggy look. Long straw is cut to shape which is the main difference as reed is mainly dressed into shape.

The process of fixing long straw
It is mainly fixed into the existing base coat of thatch using hazel/plastic spars (providing the base coat is in good order and tight) generally courses around 3 foot wide starting from the eave working up to the ridge are fixed at a time, covering up each fixing as you go. It is then ridged and trimmed up with hazel liggers (rods) running around the perimeter of the roof.

Types of ridge
Ridges are generally made from straw, but sometimes sedge is used. Ridges are usually made in two ways: The first is a wrap over ridge and the second is a butt up ridge, both can have either a flush finish or a patterned finish. Generally in Essex the most common ridge is a wrap over with a patterned finish, which in my opinion is the most attractive and longer lasting.

Modern day
Thatching is an incredibly old trade however as with most trades it is important to 'move with the times'. I personally don't like the shaggy look of long straw so I clip the face of the thatch, this gives the surface a really neat finish and although it's slightly more time consuming I personally think it's worth it.

Hand split hazel liggers (rods) were traditionally used on the ridge, eaves and gables, most
thatcher's now use ash rods, this hard wood is machine cut and looks much neater and lasts much longer then hazel.


AWARDS
In December 2016 I entered a competition that is run by the 'National Society Of Master Thatchers'. This competition runs biannually and is looking for the best thatched house. The competition is open not only to society members but any thatcher in the UK that wishes to enter, as many houses can be entered by each applicant. This was the first time I've ever entered and I decided to put forward 3 properties that I thatched.
In the winter of 2017 I was informed that I got all 3 houses into the final 6, at this point each house was visited by 3 judges (whom are thatcher's) and they made a decision on the houses and judged them 1st-6th.

I was incredibly proud to have gained 1st, 2nd and 3rd place. This is the first time this has ever happened since the competition begun in the late 80's. 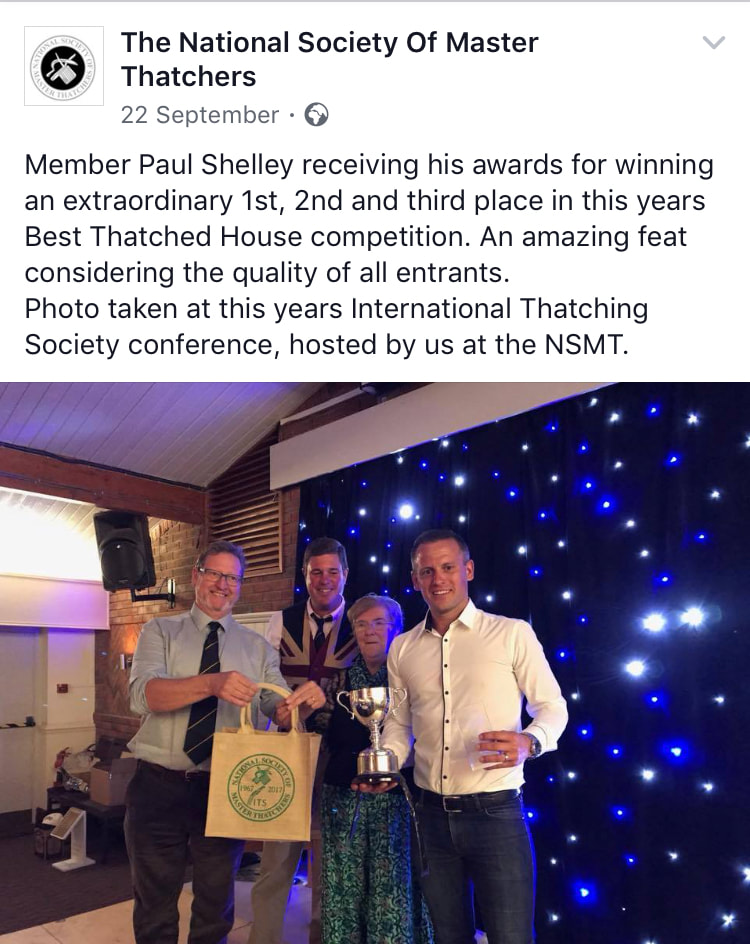